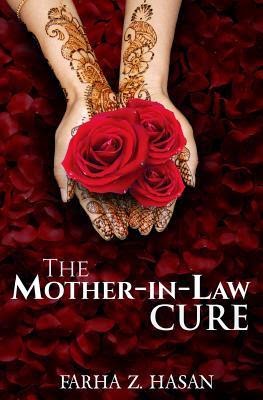 A young unassuming wife lives in the shadow of her powerful mother-in-law’s household.

Rather sinister and bittersweet, The Mother in Law Cure captures the ways of a matriarch wielding authority over sons, husband and anyone who gets in the way of her wishes.

It started off with Humara’s story when she was younger and beset by a hunger filled by an unexplained dark magic and with it, she was able to sway events to her ends. But somewhere along the way it becomes Miriam’s as she gradually shines from the background with her quiet ways and hidden wit. Gentle Miriam treated with indifference by her husband and mother-in-law but who may yet hold the power to rise above them all.

The contrast between the two women sets the temper of the writing and becomes groundwork for half-veiled battle of wills. Humara’s presence seeps into the pages like bold strokes of ink, corrupted and unavoidable. Miriam, with her impenetrable mask, could be a bit unpredictable. She glides on unnoticed and yet this sense of invisibility appears to make her far knowing.

More often, I’d gravitate, if not with grudging admiration, to the obvious formidable character but here Hasan brought an appealing subtle strength in Miriam, catching my attention to what she will do next. Other characters only served as background music it seems, or more specifically just Humara’s play things, but it was interesting how these figures turn the plot out.


The little glimpse of the nuances in the Pakistani community resonate in most cultures as of marriage, family and roles of women. But the book gives a window to break some tradition. Its flowing prose fits best the scenes of Lahore and the Middle East while the darker tinge of the story matches the gloomy Chicago atmosphere.

I think the urban fantasy touch on it adds a sharp flavor. And despite its sinister nature, the unhurried pace lets readers savor everything even the most unpleasant. Not all fairy tales, even modern day ones, end up the way it ought to be and this is a noteworthy quality in Hasan's debut novel.

The Mother-in-Law Cure is a modern day fairy tale that chronicles the rise of the book's central character, Humara from orphan to power matriarch in an affluent family. Humara's influence spans generations and continents, but things are seldom as they appear. Humara's prosperity is not simply good fortune but stems from something dark and sinister - as those who encounter her quickly begin to realize. It seems that nothing can stand in Humara's way as she pulls the strings of those around her, until she meets the unlikeliest of nemesis. Another young orphan whose status in the household is little more than a servant will be the instrument of Humara's demise. The Mother-in-Law Cure is an urban fantasy that takes you from Pakistan to the Middle East and back to the United States.

Popular posts from this blog

Paranormal Urban Fantasy Date Published: December 16, 2014 NEW from HIJINKS INK PUBLISHING….. FUSION : Nine outstanding fantasy stories merged together to create a bestselling reaction. An anthology designed for readers of fantasy . . . Paranormal, urban/contemporary fantasy, science fiction and dystopian fused together in one epic fantasy bundle. Make your way through fire and ice, love, lust and hate as NINE International Bestselling Authors come together to spin their tales of magic and destruction. This is a truly unique bundle that successfully blends all aspects of the Fantasy genre. "ELEMENTALLY PRICELESS" an EXCLUSIVE Novella by SHANNON MAYER (International Bestselling Author) Urban Fantasy, Heat Rating: 2 "My name is Rylee, and I am a Tracker." A missing child, a deadly prophecy, and a world of unusual supernaturals slam together in this EXCLUSIVE novella from Shannon Mayer. Meet Rylee, a Tracker of missing chil
Read more

Today we are revealing the brand new cover and title for Missionary Position by Daisy Prescott . The gorgeous cover is below and the new title of the book is WANDERLUST . It will be re-lanched on February 20th and it is part of Daisy's Modern Love Stories series! Read the author note below to find out why Daisy decided to make these changes and re-launch the book.   WANDERLUST (previously titled Missionary Position ) by Daisy Prescott Re-launching February 20, 2017 ( Modern Love Stories , #3) ADD WANDERLUST TO GOODREADS BOOK BLURB: #1 Top Rated Book in Humorous Women's Fiction Top 20 Humorous Women's Fiction Best Seller Romantic Comedy Best Seller "A captivating story about life, love, and an exciting and unintentional quest for self-discovery." Selah Elmore is a confident, curvy woman who knows exactly who she is and what she wants. Her less-than-stellar love life is another story. Hoping for a fresh start, she leaves her home and job in t
Read more

The Debt by Molly O'Keefe is NOW LIVE and TOTALLY FREE !  Grab the prologue to The Debt Duet now & keep reading for an excerpt! COMPLETELY FREE! Amazon: http://amzn.to/2qngto7   Nook: http://bit.ly/2qqv9Pk   Kobo: http://bit.ly/2rJJaeQ   iBooks: http://apple.co/2rK6IQE   Google Play: http://bit.ly/2qqsTYp LOVE AND SECOND CHANCES ARE NEVER FREE For the five kids who live at St. Jude’s Home for Court Placed Juveniles, life is a nightmare. Carissa, the youngest, has been there the longest. And barely speaks. Rosa is sixteen and pregnant. Simon keeps his head down and studies, hoping to get back the life he lost. Beth and Tommy, in the middle of the darkness, have found each other, and all they want is to be together. But when they get caught making out at school, it puts everyone in danger. Tommy is used to the beatings from their foster father, but when Beth is singled out for punishment, Tommy can’t sit back and let it happen.
Read more